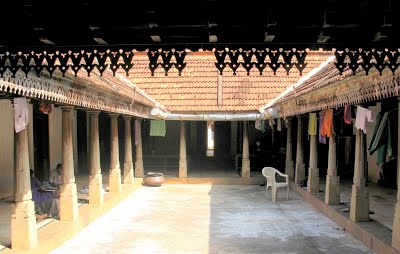 When exploring concepts associated with the Anthropology of Space and Architecture, how do you differentiate between the following and varied categories?

Vernacular definition
The Etymology of the term ‘Vernacular’  originates from early 17th century Latin ‘ meaning ‘vernaculus ‘domestic, native’ (from verna ‘home-born slave’). It has many interpretations and criteria when it comes to architecture, but the basic and general definition of vernacular is derived from the language or dialect spoken by ordinary people in a particular country or region. From an architectural perspective, vernacular vocabulary therefore means domestic, local and functional rather than the large public, classical monumental buildings traditionally built by trained architects.

“if it is built by architects, the ones that consciously design a building; the complication, theories and process of today’s modern structures indicate that architecture can no longer be called vernacular”.

The photograph above is an excellent cultural example of the ‘local language’ of vernacular architecture heritage from Karaikudi, in the region of Chettinad, Tamil Nadu, South India.  The large, internal courtyard known as ‘nalukettu’ is integral to the dwelling, and the large size a specific privilege of the upper caste Hindu Chettiyar householders. This ‘open to sky’ space (a term often associated with the preferred built form of Indian architect Charles Correa) is suitable for a range of joint family community activities that take place here. This ranges from domestic food chores and often sleeping due to warm weather, to ritual marriage ceremonies, and the artistic Kolam floor designs. As indicated in this visual image, the Kolam motif is a decorative pattern produced by all Hindu Tamil women, irrespective of caste, on a daily basis in white or coloured chalk on the threshold of the domestic house. This often becomes larger and more elaborate during the annual Pongal harvest rice festival as illustrated on the right hand side of the Chettiyar courtyard floor. The South Indian Chettiyars were rich traders in SE Asia, particularly Burma, and much of their architecture has beautifully carved wooden decorative eaves which edge the sloping tiled roof, regionally designed to drain and collect rainwater. Notably the inner walls of these houses are plastered with lime mixed with egg white to get a cool but shiny and smooth surface. In contrast many of the internal stone pillars are marble due to commercial trade with Italians or wooden Burmese teak, and some still retain Venetian stained glass windows and crystal chandeliers. The ancestral Chettiyar dwelling is merged with historical cultural traditions using permanent  ‘pucca or pukka’ building materials. The architectural vocabulary of these South Indian houses thus combines European influences to produce a unique heritage in an Indian regional style but equally the vernacular structures are also associated with the transmission of tradition in the way the architectural masons knowledge and visual or aesthetic  design has been passed down from generation to generation. Ironically, however, due to the high maintenance of these properties, many families are now demolishing or neglecting their houses which has resulted in the Indian government converting these beautiful Tamil homes into 5* luxury hotels for the commercial tourist market.

Pukka ( in Hindi पक्का, Urdu پكّا‬ pakkā) is a word of Hindi and Urdu origin literally meaning “cooked, ripe” and figuratively “fully formed”, “solid”, “permanent”. In Britain, the linguistic slang term (note of Hindi origin) is often use to describe a ‘pukka bloke’  meaning a “genuine” or “solid man”; derived from the stiff upper lip of the Colonial inspired pukka sahib. Pukka buildings are therefore aspirational dwellings as they are designed to be permanent, stable, solid structures.

In contrast much indigenous architecture in India can be located among the Tribal groups of Northern and Central India where the typology of styles, characteristic shapes, sizes, entrances and exits will vary from region to region, depending on the climate and kinship structure. Buildings may form community longhouses or square houses, houses built on platforms due to environmental flooding , and houses built on plinths with thatched and conical roofs. These domestic spaces are distinct and reflect the cultural beliefs and identity of each tribal group, that may collectively house up to 80 people or clans. Due to its transitory nature, Tribal architecture has not been classified as Pukka but defined by Indian architects as Kacha, built by local people using impermanent building materials such as mud, grass, fibre, or semi-permanent wood, coconut or palm frond. Kacha architecture is replaced on an annual or seasonal basis as is therefore a short lived dwelling without stability or endurance, that constantly requires replacement ( no intentional gender references!) However, the advantage for local communities is the traditional building materials are readily available from the land, they are cheap and low maintenance, but interestingly the dark indigenous walls and floors often reflect a strong form of regional decorative embellishment.

Architecturally, these tribal, vernacular dwellings have not traditionally been studied in contrast to European classical architectural styles but simply classified on an evolutionary, global scale. Tribal architecture was neglected, often regarded as backwards and primitive, associated with underdeveloped societies which became a cultural metaphor for the people (Oliver:1992).  However, since the 1970’s there has finally been a dialogue between architects and anthropologists to explore how the fundamental use of space and place relates to the building material and cultural meanings of vernacular dwellings and tribal settlements. Shelter is a universal need, and despite the shifting definitions globally theorists are now exploring how the Anthropology of Architecture, or the way cultural values are reflected through vernacular structures within the built environment, provide a sense of identity for the local community.